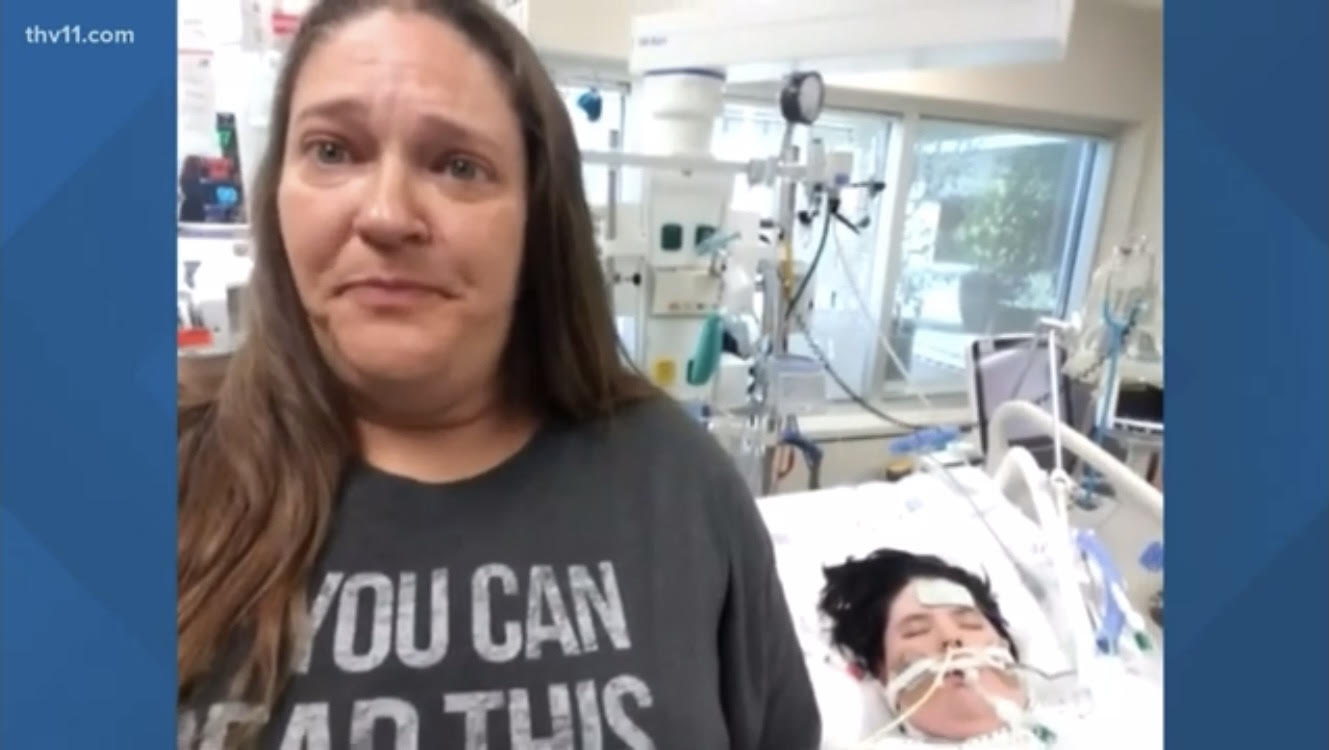 Now I See: The Chance to Learn from a Mother’s Mistake

I cannot stop thinking about her. Maybe you saw her too, on the news, or read her story in the paper. I posted the article here. Angela Morris is an Arkansas mother standing beside the bed of her 13-year old, Caia, in ICU at Children’s Hospital.  Caia’s eyes are closed and she appears unconscious. Her skin is flushed and neck positioned in what looks like an uncomfortable angle to accommodate the ventilator that keeps her alive. For now. A few weeks ago Caia was a normal kid. A clip shows a selfie of her, with bright dark eyes and hair. The filter for the picture added fun little flames to her hair, and cat-eye make-up around the edges of her eyes. Now Angela has no idea if she will get to take her daughter home.

This is all heartbreaking enough.

But the thing I keep replaying over and over in my mind is one particular statement Angela makes:

“I wish I had made better choices for my daughter.”

Just like that, any differences I may have with this former anti-vaxxer disappear. She is me. She is every mother. When you distill us down to our purest form, this is what a mother wants: to make the best choices for her child.

I wish I had made better choices: mistakes in motherhood

It’s a huge responsibility. A sacred, holy art. Sometimes it feels like a crapshoot. We mothers do our best. Sometimes we are ill-equipped for the challenge before us, like our mothers were. And yet, here is Angela, brave Angela, by her child’s bedside, fully owning her bad decision. In the valley of the shadow of death. I wish I had made better choices for my daughter.

What parent doesn’t wish that at some point? I can think of plenty of poor choices I’ve made for my kids. One time I let my sister-in-law try a new technique for cutting bangs on my daughter Grace, and she ended up with a hairstyle only ever witnessed in the remote Amazon village of the Auca. They cut their bangs from temple to temple as some kind of ceremony; I saw a picture of it in a book. Another time I let Harper drive our truck before he was old enough, in a storm no less, and he crashed it into the trampoline. Both of us could have been injured. I remember holding him in my arms for comfort, stroking his hair, and terrifying myself with the realization of my own stupidity.

With Adelaide I was too much of a pushover. She loved her “baba milky” so I let her keep drinking a bottle of milk in bed till she was 4. When the dentist discovered her baby teeth were rotting as a result, I was ashamed. And poor Stella, still little at age 9, falls prey often to choices I’ll probably one day regret, like the amount of screen time she is allowed (too much), and the amount of piano practice she gets (too little). Harper and Grace are constantly reminding me of the tiger mom I was when they were her age, and practiced guitars, pianos, and violins for hours. I don’t know what has happened to me other than that I am old. “You guys wore me down,” I tell them. Stella is so glad to be the beneficiary of their efforts in that regard. But they say she’ll wish someday that she could play the piano better. We probably both will. But that doesn’t change the fact that at 49 with four kids and a full-time job, I’m too tired to make her practice.

I’m sure I have made dumber choices than these that don’t come as easily to mind. I thank God that at this point they are alive and healthy and I haven’t done anything (yet) to mess that up. They are entrusted to me and it’s my job to keep them safe from harm.

Beyond a mother’s control

Some things are out of our control, of course. I watched in horror from the bleachers a couple of years ago as Harper was tackled on the football field. I studied the x-ray where his leg and ankle were broken. I went in with him for the MRI and surgery. And later, as he healed at home, I listened as he cried out in pain. Parents in that situation pray to Jesus to

make it stop. And a mother’s or father’s heart says, “I wish it was me. I would trade you places if I could.”

Angela Morris says the worst part of it all is knowing that Caia’s illness was preventable. I have no doubt in my mind that if that mother could climb into the hospital bed and put herself on a ventilator instead of her daughter she would. Angela must wish that, desperately.

Alexx Morris-Cooper in an undated family photo. (Special to the Democrat-Gazette)

But she cannot take Caia’s place. All she can do now is watch and wait, hoping Caia survives Covid, and do everything she can to keep other parents from making the same mistake. Angela believed false information and the opinions of people that don’t matter one bit to an insidious virus, here to destroy us. No political spin or culture war matters in the ICU. Angela says she wishes she had listened to the truth.

“I just had a false sense of security that it was just like the flu and it wasn’t that serious.” Angela’s big eyes, as though gazing into an abyss, stare out from the screen. They are on day 17 in the hospital. Day 17 of watching Caia fight for her life. “Obviously it is that serious and it was that serious. Now, I can see,” she says.

Moving from blindness to sight sometimes takes a tragedy like the one Angela is facing. But sometimes we are given a chance—the amazing grace–to see through someone else’s eyes before tragedy comes to us. That is Angela’s hope for the rest of our state. “I just want people to get their kids their shots. Everybody just needs to get the shot. It’s a much better route than the one we’re in.”