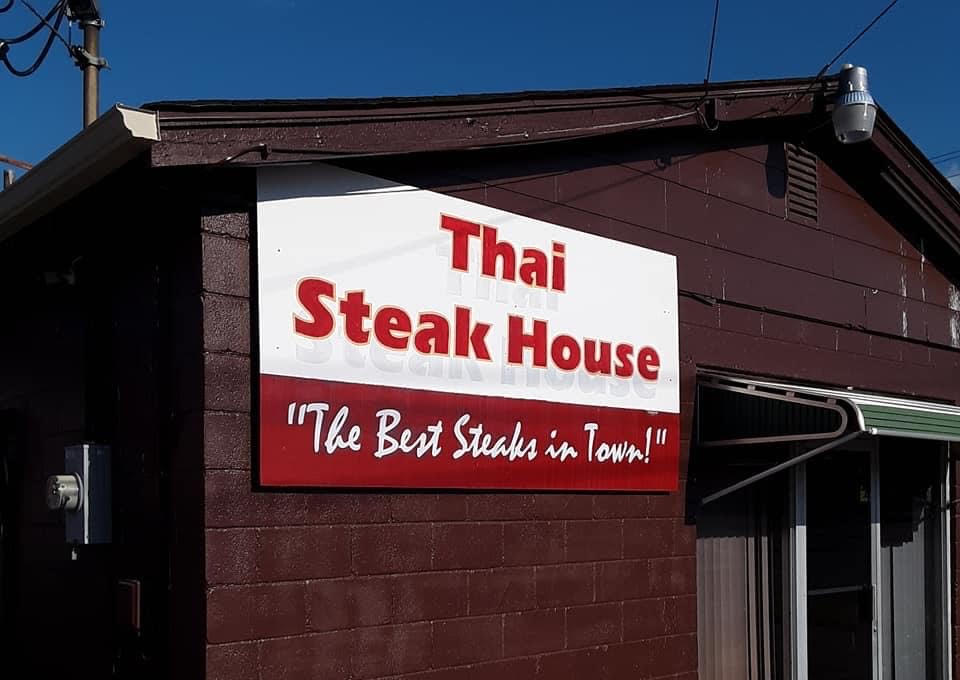 The concrete block building that used to house a liquor store is painted dark brown. A red and white sign that labels the Thai Steak House also proclaims “Best steaks in town!” I assume this is right though I’ve never had one. I am not aware of other steaks in my hometown.

Two gilded wooden statues, one of a woman and another of a mythological creature with the upper body of a person and feet of a bird, bow and greet everyone who walks through the door. The scents of ginger, garlic, curry, onion, egg, basil, and hot pepper float through the air and tickle my nose. Nick waves from the kitchen as his son Matthew takes my card and rings up my order.

I’m picking up spring rolls, egg rolls, chicken hibachi, hibachi no meat extra veggies, dumplings, chicken fried rice, and volcano chicken, spicy #2. Nick brings out the containers of food, piling it on the counter, adding egg drop soups and canned drinks I didn’t order. His face beams a huge smile. “For you. On the house.” I start to protest, as I always do, and he waves me away as he always does. “No no no. On the house, please. For your family. Thank you.” His eyes twinkle. He disappears back into the kitchen where his wife cooks alongside him over the steamy grill.

A Son, a Father, a Family

Matthew won’t be there much longer. He graduated high school with my son and heads to college, on a scholarship, in the fall. I wonder what his parents will do at the restaurant without him and his command of English. But I imagine they have things figured out. They are that kind of people.

I know about Matthew’s command of English because my daughter tutored him. It was one of those golden experiences you want your kids to have but are powerless to orchestrate; we just got lucky. Math is the same in any language, and according to my kids Matthew is a math genius. Grace—so aptly named—worked with him after school at the restaurant to help him catch up in her specialty area of words. She wouldn’t take any money. So, with the subtlety of Captain Obvious, Nick began to stuff her with exotic food. Grace learned all of the best things they served because by the time she finished tutoring Matthew she had tasted it all, and brought several things home. She loved the egg drop soup. This was several years ago. But Nick remembers.

On Father’s Day this past weekend, I celebrated my dad, who grew up in Cecil, Arkansas, attended a one-room school house, and was the first in his family to go to college. When I think of the distance from his beginnings to the beginning he gave me I’m pretty amazed. In one generation he managed to rise out of poverty and into a position so far from it that his kids have trouble fathoming what it was like not to have a nickel for a coke, and his grandchildren actually have too many toys. This is the story of my family. The big strong shoulders we stand on. My dad and his vision, his sacrifice, and his hard work to pave the way for us to live this beautiful life.

I wonder if Matthew ever looks at his father’s shoulders bent over the Thai Steak House’s kitchen sink and sees the shoulders of a giant. Because even though I’d put Nick at about 5 feet 8 inches tall, maybe, when Matthew steps up to his future this fall he’ll be standing tall. He’s Nick’s boy. And the perilous journey across the world to Ozark, Arkansas; the hope, the fear, the risk; the long hours in a hot kitchen, day after day, year after year, serving people his culture plate by plate, bite by bite, knowing they will never/can never fully understand; the aching back, tired feet, burning eyes; the lack of time for anything else, like being outside, going to school, playing, working on his own English, finding his passion, dreaming his own dreams…it is for Matthew. It’s Nick’s vision, his sacrifice, his joy. It’s the laying down of a father’s life so that his son can live his.

Here’s to my father, and Nick, and all of the other fathers who hold up our state—our country—on their shoulders. You are brave and strong. And appreciated.