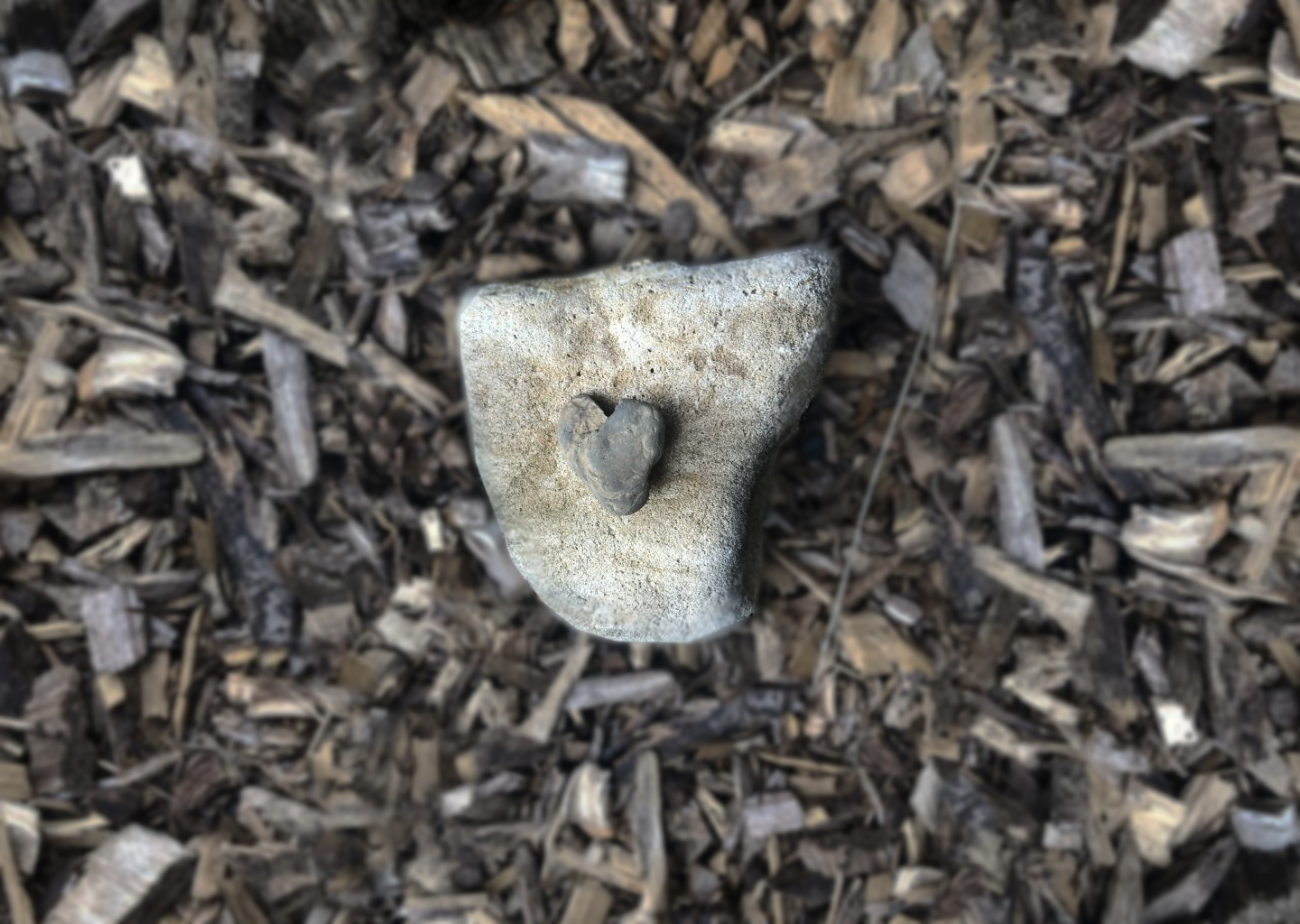 I’ve always believed this. Plus, I love geography. Perhaps that’s why, whenever I’m around rocks at one of my parents’ quarries or find myself stacking stones beside a river, my eyes are drawn to the ones shaped like Arkansas. My sister-in-law looks for the ones shaped like hearts. So between ourselves and our kids we end up with a lot of these treasures. I like to stick them around in my flower beds.

I have a little stack of different sized Arkansas rocks right by my door. When my nine-year-old presented me with a tiny gravel heart she found in the driveway, I decided to give her a little geography lesson. I took down my best Arkansas rock and placed the heart in Franklin County. “This is home, where we live.” Being the child of an English teacher, the symbolism was not lost on her. “It’s where our heart is, Mommy!”

Home. Where our heart is.

The other night there was a storm and it rained. Early the next morning I sat on my steps as I always do, trying to put on my running shoes with about five dogs jumping around vying with each other to lick my face. I glanced over at our little heart of Arkansas creation and noticed, to my dismay, that the heart had washed/blown off. Only Arkansas was left, stark grey against the sepia background. It took a minute for me to spot the heart. Upside down and cast aside, it didn’t really look like a heart. It just looked like a rock. I picked it up and set it back on top of Arkansas, this time more centered so that maybe it would have a better chance to hold.

I’ve been obsessed with unity lately, although I guess it’s always been an important theme in my life. My friend list has never been homogenous. I tend to favor more of a hodge-podge of people. In high school this looked like playing in the band as well as being a cheerleader; heading up the library club along with being president of my class. I was the nerd elected “Most Likely to Succeed” who also won the beauty pageant. While on the surface those things may seem like contradictions, to me they made sense. Why pigeon hole oneself into a single category? Walt Whitman said he contained multitudes. Don’t we all?

Running for office in 2020 afforded me many learning experiences; some lovely and some brutal. It may be that having no previous political aspirations shielded me somewhat from the reality of our partisan divide. Whatever it was, I never expected people to be so polarized at the local level. Washington–yes, I get it. We all see that madness and mayhem on TV. But not here; not in Arkansas; not in our little country communities where we go to work, and church, and ballgames together. Not where your kids are my kids, we give each other wedding showers, we visit one another when someone is sick. Heck, we even share our okra and tomatoes!

One of the first things I did as a candidate was contact every county political committee regardless of party and ask them to let me speak. I told them party was not a big deal to me, that I wanted to represent everyone. When I talked to John Brummett about this he said something like, “I don’t know whether to think that’s weird or wonderful.” I told him then what I’m telling everyone else now: it’s not an either/or situation. It’s the choice of the people what kind of culture we allow.

Some news stations, some churches, and a great many politicians owned by special interest groups would have us believe it is a civil war. We must be Democrat or Republican. Left or right. Vaccinated or anti-vaccine; good or evil. It is Us versus Them; there is no possible in-between. No co-mingling of the tribes. It’s a fight to the death.

And yet–is this really the truth? Have we the people decided to hold these truths as self-evident? Is this the way to life, liberty, and the pursuit of happiness? If I believed that I would have given up on Arkansas after being defeated.

But I am not giving up. This is my home. Hear me from the rooftop shouting through my Ozark Hillbilly golf team fundraiser mask: No. It is not the truth. It is not the way to life, liberty, or happiness. It is not who we are as Arkansans and Americans. And church people, it is not even Christian. It is not Us versus Them. No, it is not.

I don’t know all of the answers and so I try to approach others in humility, but I believe in bold, clear action. And the action that is needed for such a time as this moment in our state and nation is reconciliation. Determined, intelligent, deliberate, difficult, messy reconciliation. It is not touchy feely. It’s not excusing, or saying everything is okay, or that we even agree. It is doing the hard work of restoring a relationship that is broken because whether we agree on everything or not we recognize we need each other; we are in this together. There is middle ground whether we acknowledge it or not.

Let us be the ones who decide to be different from the crowd. Let us be the movers and shakers–the leaders–who show the rest of America how it’s done. Click To Tweet

But let’s be people who seek it. Who recognize that place is sacred. It’s where we heal. I’m so thankful for those who are working to build bridges in our communities. Those fighting forward, registering voters, keeping watch, informing us, showing us the way back to each other, back to the common good. We need more leaders who will rise up to put people over politics and reunite us–not just in words but in deeds.

It can start here in Arkansas. Let us be the ones who decide to be different from the crowd. Let us be the movers and shakers–the leaders–who show the rest of America how it’s done. Let us reject the narrative that it has to be either/or. Arkansans are known for our independent spirit. Let us be weird and different from the whole world if that’s what it takes to also be wonderful. We can find the courage in our hearts to lock arms and stand together. Some might say I’m naive, but I know we can do it. Let this be the place where reconciliation begins!