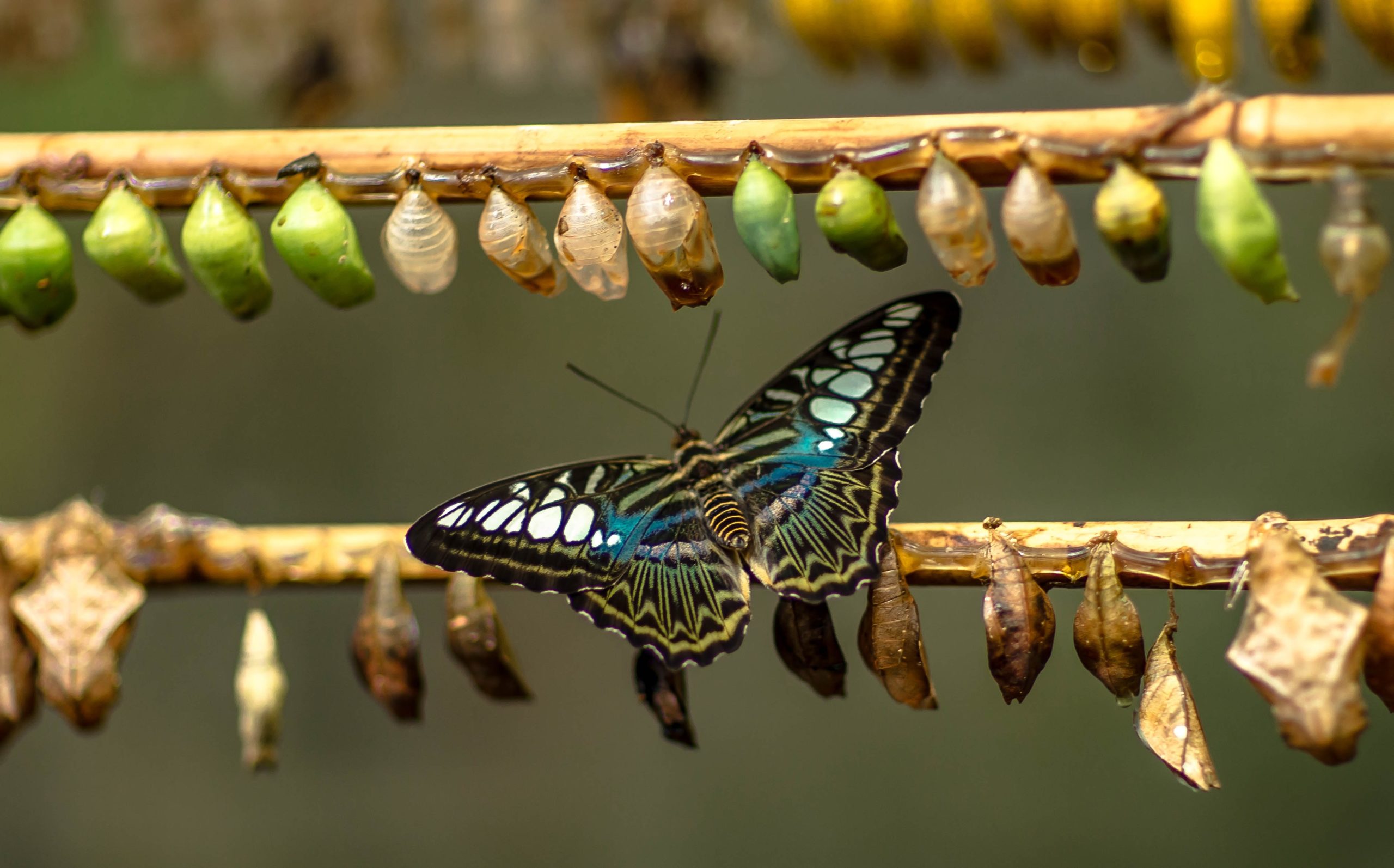 Silas and Elisabeth have just gotten their toddler down for the night when they call me. They are infinitely patient while I fiddle around trying to make Zoom work on my computer. I’m embarrassed by my lack of tech-savviness, but the warmth they both exude puts me at ease. They relax and cuddle on the couch, giving helpful suggestions in friendly tones, seemingly happy for a moment just to breathe before our interview. I understand that. I remember the toddler days with my kids. And Silas and Elisabeth both have full-time jobs, he as a LCSW and she as a speech pathologist.

I finally get connected and ready with my memo pad and pen. “I may have some questions, but I’d really just like to start out listening while you tell me your story.”

Elisabeth and Silas share a glance that segues into laughter. “Our dogs introduced us,” Silas

begins. “We were both walking our dogs at a dog park and they made friends.”

“One thing led to another. We made play dates for our dogs—basically planned to come to the park at the same time—and through those meetings we got to be friends. Then we started hanging out and became best friends. Then we fell in love and eventually got married. Now we are parents!”

They tell me about the heartbreaking experience of failed IVF, but dwell on the joy of successfully adopting their daughter. Soft browns accent a wall the color of sweet cream behind them. Toys scatter like confetti across the natural wood floor. Their modern farmhouse with its vintage lighting seems the perfect metaphor for this small-town Arkansas couple and the impossibly new kind of family they’ve built.

I met Elisabeth when she was a teenager. Fresh out of college, my husband and I taught for a few years at the rural school where she was a cheerleader and basketball player. She lived on a farm with two older sisters. Her dad was head of HR at a local company who supplemented the family’s living raising chickens; her mother was a PE teacher. One of her sisters came to a Bible study I had for girls at my house.

I remember her parents because they were good to us—especially her dad.

There was some stressful business at the school that I honestly can’t quite recall now; I just remember being concerned that my husband, the football coach, was about to get a raw deal. Elisabeth’s dad was on the school board. He stuck his neck out for us and everything turned out fine. That’s the kind of thing, the kind of person, you never forget.

Since I know the general shape of Elisabeth’s childhood I ask Silas to tell me about his. He says it was normal, if a little sheltered. He grew up in the River Valley in a devoutly Christian home. His father was a business owner and his mother ran a daycare. He liked baking, playing sports, and spending time with a few close friends. “I was an introvert,” he says. “I was interested in art.” His parents loved him and he had a good relationship with his one sibling, a brother. “I was kind of envious of him—the stuff he got to do as a guy—but I didn’t really have the language to describe why.”

Silas tells me he began to acquire that language when he moved to Fayetteville to go to college at the U of A. “I thought I might be gay,” he says, “Especially when I met Elisabeth and felt so attracted to her.”

“What about you?” I have to ask Elisabeth. “Are you gay? Had you ever thought of yourself as gay or bisexual?”

“No.” She looks past me, like she’s searching the air for words. “I mean, I guess I never put a label on it. I’d only dated guys before. I just knew I loved his personality.”

If you’re confused at this point in the story it’s okay. I am too. That confusion can give us empathy for the people who lived it.

The man and woman sitting in front of me show no outward signs of the harrowing journey that brought them to this place. Elisabeth is still Elisabeth, the smart, pretty, cheerleader she always was. Older, a little more mellow maybe, with the same chocolate brown hair and doe’s eyes she had as a teenager. Silas fits beside her like they’re two pieces of a puzzle. He’s muscular, more fair-skinned, with eyes that smile behind glasses and a full, dark beard.

It’s hard to imagine he lived for 21 years as a female. That they were ever known as Stacie and Elisabeth, the friends who met in college at a dog park, who became a lesbian couple.

Just ten years later, I’m having a hard time imagining how a child could grow up with no

examples, no concept, no words to use to process his own story, much less begin to tell it to someone else. “I think it was just being in a small town in Arkansas,” Silas explains. “Moving to Fayetteville opened my eyes to other possibilities because it’s more diverse, inclusive. But the biggest factor, believe it or not, was social media.”

Social media was just beginning to be a thing. “I was 21 years old and I had an ‘aha moment,’” Silas shakes his head. “I remember coming across a trans male on Instagram and just realizing that’s what I am. My whole existence was validated. I was suddenly demystified about all of my conflicting feelings.”

Reading other people’s stories and slowly gaining the vocabulary to understand his own experience, Silas began to see a therapist. Elisabeth remained a comfortable, safe place for him to sort through what a transition might look like. In time he saw a doctor in Eureka Springs who provided guidance and options, and Silas began hormone therapy.

“It was such a happy, exciting time,” He tells me. “It’s still really hard to describe it. But as my body started changing it was like I was becoming more and more myself. Like layers of costuming peeled off to reveal the real. Like shedding old skin. For the first time the mirror started to reflect who I was on the inside.” Silas laments the new laws banning treatment for teenagers in Arkansas. “I’m so thankful I didn’t have to contend with that,” he says. “I think for other people in our lives it feels so confusing, but for the trans person it’s actually the complete opposite. For us, for the first time, everything makes sense—everything begins to feel right.”

“He gained so much confidence. A sadness that seemed to always hang over him began to go away.  Like the sun coming out.” It’s clear she’s proud of his courage—and Silas is so grateful for hers. I’m in awe of them both. I want the story I write to end here, at a happy place, with this sweet couple and their precious daughter, good jobs, pretty house. I want them to feel at home in their home state of Arkansas. To be safe, included, free to live their lives as they choose. I want to rewrite the laws our legislature passed against them. I want those laws unpassed. Silas and Elisabeth want the same things, of course. They wonder what the future holds. They hope they won’t have to move out of Arkansas to live in peace.

But there’s a deeper sadness that hangs over Elisabeth. She knows I’m going to ask: “How have your families handled all of this?”

Silas puts his hand on her knee and they make eye contact as a tear slides down Elisabeth’s cheek. “Mine has been great,” he says. “Of course they’ve had questions and there’s been awkwardness, especially early on, but at the end of it all they love me. They love Elisabeth and our daughter. They want to be a part of our lives; they just want us to be happy.”

“They all came to our wedding.” Elisabeth wipes her eyes. “In our pictures we have all of his family but not all of mine.”

“For her family it has been a lot harder,” Silas pats her leg. “Which makes it so hard on Elisabeth.”

She grabs a blanket off the back of the couch and gathers it around her like a shawl, wrapping herself in its softness. “We lied to my family for awhile. We didn’t lie because of shame—we are not ashamed. We lied to protect them. I knew it would be difficult and I did not want to hurt them.”

She relates the scene in her parents’ home in which she and Silas told her parents the truth of their story and their plans to get married. Her father shook the Bible at them and said words that sting again in the re-telling, so much so she has to stop for a moment. Tears fall like hard rain. “He said we were terrible people. He said he’d rather me be a drug addict than marry Silas.”

This was about seven years ago and they haven’t spoken since. Her sisters and aunts are very supportive and her mother manages a little contact, but Elisabeth tries to accept that she may never see her father again. The sorrow on her face is palpable. “We were so close,” she reminds me. “I was a Daddy’s girl. He and my mother taught me unconditional love, and yet I have learned that his love was conditional.” Her voice cracks again.

I am struck by the irony in front of me. A little girl raised to know Jesus and love others as He does. That value takes root and becomes so strong in her character that it defines her as a woman. She is able to walk through fire with a friend, who eventually becomes her husband, showing radical grace and loving unconditionally. That love overcomes fear and judgment and pain. It gives life and joy. And as a result of this miracle, she is rejected by the father who first showed her what love was.

But the story doesn’t have to end there, with this father I remember as a good man missing out on his smart, kind, extraordinary daughter and her family. His granddaughter.  The same Bible he shook at them says life is a vapor; that we are all dust and to dust we will return. It also says that when all of the dust settles, only love remains. No theological debate. No politics. No I am right and you are wrong. Nothing else matters—just love. It may not always lie within us to identify, applaud, or endorse. And those things may not even be any of our business. But we can choose to love anyway. I believe this man has it in him. I saw him stand up for a kid he barely knew, a coach fresh out of college who deserved a chance. I hope with all of my heart he will find the courage to love—unconditionally—before it is too late.

I hope we all will.  Everyone across the great state of Arkansas, in our lives and laws. I hope we will choose to heed the words of Matthew 7:12—as Jesus commanded–to treat others the way we want to be treated. If so we will afford everyone the respect and dignity we want for ourselves. We don’t have to understand everything; we don’t even have to agree. But, I hope we will fight, not only for ourselves and our freedom, but till everyone is free. That’s really what inspires me about the story of Silas and Elisabeth. They are fighters. Arkansas needs them to stay and invest themselves here because they have a lot to teach us. They represent the best that is in us. It’s who they are and what they stand for together: courage, strength, and the transforming power of love.