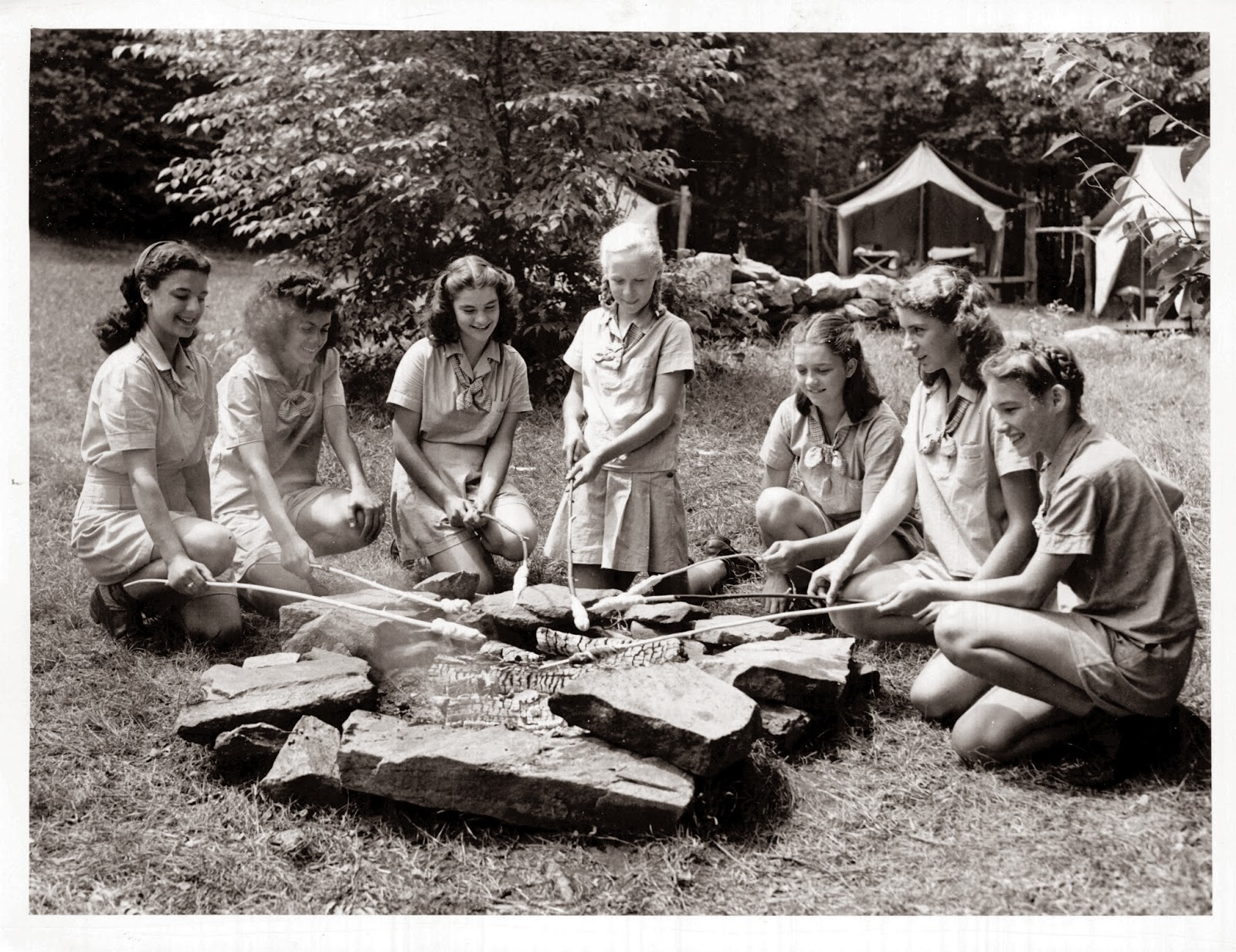 I went to Girl Scout camp one summer. It was a two-week camp, all girls of course. We slept in tents for the duration of the two weeks. Two girls to an old army tent. The tents smelled musty and were a little damp from being stored. No electricity or water at our camping spots. The fires were built by the camp chaperones, so bright they were almost blinding. Other than the fires we had flashlights. The smell outside the tent was a combination of wood and moss.

We ate at the main lodge with all the other scouts. The food was laid out on several tables on platters. We would take what we wanted and pass it on to the next girl, family style. After we were done eating we would go grab showers before the events that were planned for us for the day. Things like archery, horseback riding, crafts, or swimming.

On this particular day it was craft day. We had to climb a hill to get to the scout lodge. As we were heading to the lodge to do some crafts, it started pouring down rain. The hill became as slick as an oil spill. The dirt was now mud—mud soft and smooth like your favorite lotion, slick like ice. As we attempted to make it up the hill, we heard someone slip and slide down the hill. It looked like a waterslide. You could see the claw marks as she went down, trying to stop herself from ending up in the creek. The air was fresh, like clothes coming out of the dryer. I don’t know if we even discussed what came next before it happened.

We all decided to take turns sliding down the slick hill, one at a time. Others would wrap their legs around each other and slide down together. It was a quick trip to the bottom of the hill but a long way to get back up. Our legs burned like fire from the climbing. We were muddy from head to toe, and we could hear our chaperones hollering for us to come to the lodge. As the scouts came into view, the look on the chaperones’ faces were priceless; you could see the awe. We had to go take another shower to get cleaned up before we would be allowed into the lodge. The smells of everyone’s soap and shampoo were so refreshing. After crafts, we went back to our tents to relax before the next event for the day.

Some of our scout tents had leaked from the rain, so we made clothes lines for our soaked items and rung them out the best we could then hung them up. You could see clothes everywhere you looked. The smell of mud and dampness filled our noses.

Then the sun came out and made it sticky like a cinnabun just out of the oven. The campfires smoldered and smelled like damp moss. The bugs came out with a vengeance. The ticks found us to be very sweet and latched on like best friends. The mosquitos saw us as their main meal and were not afraid of swarming and biting. Some of us were lucky; we had brought bug spray. Others of us had forgotten that, along with other things for our two week camping trip. We could hear the bugs whispering in our ears, saying, “I think you will be my next meal.” Swatting did no good at all.

Our tents were no safer than being out in the wide open. There was no relief from the nasty bugs or our impossible-to-clean clothes. Our clothes could stand up for themselves without any help. You could smell body odor wherever we went.

The two weeks went by pretty quickly. We made a lot of friends and promised to write, but most of us lost contact after a couple of months. We hoped to meet up the next year though. The Girl Scout camp songs we would make up would have you laughing so hard you thought your sides would burst.