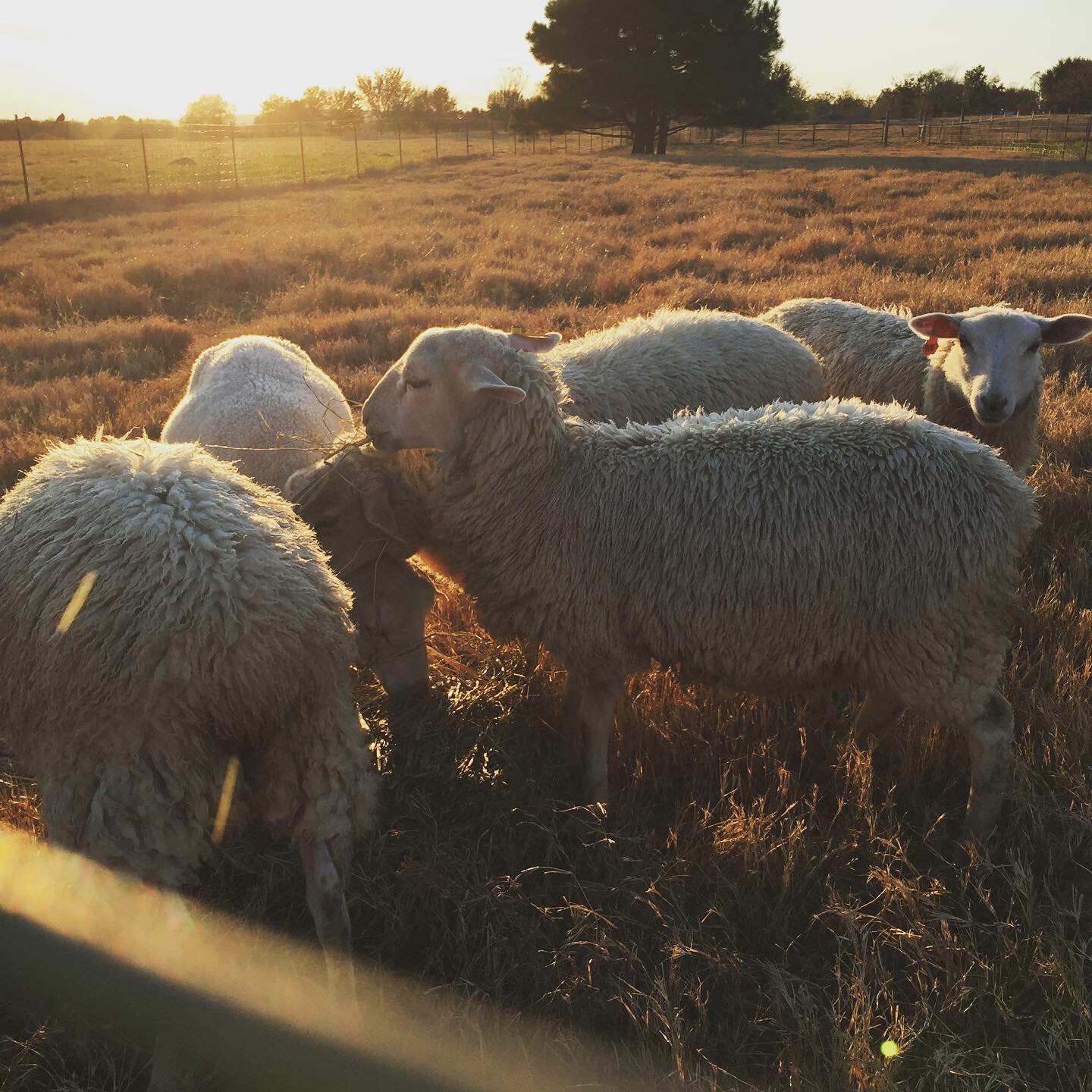 On Limits and Localism

Making a way for traditional farming in the Ozarks. Reclaiming care and connection to the land and our neighbors, one choice at a time.

With the patriotic pop and sizzle of July Fourth near at hand, I am ruminating on a 2008 Wendell Berry essay entitled “Faustian Economics”[i]. Berry, whom I like to think of as the patron saint of small farmers, preaches the gospel of limits—a word with the power to rankle us freedom-loving Americans. Yet I can hardly think of an idea more timely or appropriate to the hills we call home.

My husband and I co-own and operate a small, diversified farm in the Ozarks. Though we are fairly new to owning a farm, we both come from farming families that run generations deep in this region. We are entering our fifth year of raising mostly heritage breeds of livestock—sheep, swine, and cattle. We also cut our own hay, like most of the local farming families we know. But we are the only ones in our community doing that work with a team of Belgian draft horses. Think Clydesdales, but blue collar.

In the decades following World War II, the American agricultural system summarily swapped the checks and balances inherent to the land for the ideal of limitlessness. Earl Butz, secretary of agriculture under Nixon and Ford, was known for touting the line “Get Big or Get Out” to America’s farmers. Butz bade farmers plant commodity crops ‘from fencerow to fencerow,’ with no allowance for land to rest, no crop diversification or rotation. The family farms so prevalent in the Ozarks found no place for themselves in this brave new world of consolidation. And most of the farmers who worked them found themselves faced with the gut-wrenching decision to either take on a crushing debt load in order to buy into this new structure or bid farewell to the only way of life their people had known for generations.

Our region’s agricultural numbers evince both those who Got Big and those who Got Out. In 1950, there were nearly 40 thousand farms in the Ozarks, averaging 136 acres each. By 2017, that number had decreased to fewer than 16 thousand farms with an average acreage of 246[ii]. Hear this: in not quite seventy years, we sustained nearly a 59% decrease in the overall number of farms in our region, with those remaining farms growing by 80%. All of this while the agricultural labor force was rapidly draining out of local economies—a trend that began in the WWII years and continued on for decades afterward[iii]. In short, the insipid doctrine of limitlessness was taking hold in our home place.

It does not take an expert to recognize that the Ozark Plateau is already marginal land. We do not have the black topsoils of the northern Midwest. We have rocks, with a skin of red clay on top. Constant production is too much to ask from any landscape; it is a laugh-worthy request of the Ozarks. While most of Arkansas’ row cropping has historically been confined to the delta, the uplands are largely employed with animal production. But Butz’s edict portended a new era for livestock farmers too. The diversified, low intensity flocks and herds maintained by so many Ozarkers fell out of favor. High-concentration chicken and hog confinement operations became the norm, churning out millions of pounds of meat per year into the American and global markets and unleashing hell on our local watersheds and ecosystems. In effect, Butz’s mantra and the changing national policy it reflected displaced traditional farmers not just physically but in the collective American psyche as well. The scale, care, and community consideration so central to our style of farming in the upland south became an anachronism, those who valued it parochial.

Fast forward to a world in crisis. In addition to a myriad of other collateral lessons, the COVID-19 pandemic has uncovered the weaknesses inherent in a globalized food system. I hope to God that every American sat up and took notice when that cat came screaming out of the bag. You cannot look at a food system in which the grocery store is totally cleaned out of milk yet the dairy a mile down the road is dumping its product because their market has evaporated and tell me something has not gone terribly wrong. Farmers are plowing crops under or leaving them to rot in the field in the same communities where thousands of families are now food-insecure[iv]. It is easy to cast blame on the farmer when these stories come to light. It is also lazy to do so. James Rebanks, a shepherd in the ancient tradition of the UK’s Lake District, once tweeted with great acumen, “Intensive farming isn’t a moral failing of a farmer—it is a social and economic failure of a society.”[v]

The pandemic has prompted my family to reevaluate our food supply lines and make changes. We started buying milk from our friends up the road who run a small dairy. We now buy eggs from a neighbor with a home flock. Another friend bakes bread out of her home that we purchase. These are the things I would not have “had time” for before. But it turns out that these small visits around the valley have such value in themselves; it is a chance for us to check the pulse of the neighborhood, ask after everyone’s kids, and have a laugh in a time when laughter is more golden than ever. It feels like each visit we make or receive weaves a single strand back into the social fabric that is so threadbare in many of America’s rural places. Even after things return to some kind of normal, I’m unwilling to give these gifts up, even if it means cutting out other thing to make time. We have found an expansive place within these new limits we have set for ourselves, a world of abundance within five miles of our front door. We know our neighbors better. We know this valley better. We know how to feed ourselves when supply lines dry up. And as a mother of three suddenly parenting in a world with precious few guarantees, that helps me sleep at night.

Health Before all Else

I am not talking about doing things the hard way just for the hell of it; I’m talking about being willing to do things the hard way when health dictates it, and, as consumers, giving farmers a market for products raised with something more than speed and profit in mind. Every dollar spent is a vote cast; not a one of them is neutral. Consumers vote for a food system in which farmers are paid fairly for their work, good animal husbandry is encouraged, sustainable land use practices are valued, and local communities and economies are protected. Or they vote for the system we currently have, in which more and more power is consolidated into fewer and fewer hands, family farms are going under at eye-popping rates, rural spaces have declining or non-existent economies, and, as made so plain by the current pandemic, renders us highly vulnerable in times of global crisis. “Viewed in the longer term,” writes biologist Marc Foggin, “the typical globalized intensive agriculture models for feeding the world that are currently favored and promoted by many policy-makers, businessmen and governments are simply unsustainable. Business models that focus only upon increased food output without including drivers that respect social and environmental issues have seeds of destruction built into their DNA.”[vi]

Nor am I suggesting farmers bear the financial weight of switching to a locally-based agricultural system with no guaranteed market for their products. That is why the two sides of this equation—the farmer and the consumer—must co-evolve. As grand as it would be if ethics alone could pay the bills, the reality is that if consumers are unwilling to pay what agricultural products actually cost to produce, farmers are often faced with the choice between doing what they know is better for the land and doing what they know will keep their names on the deed to the family farm. As Maria Benjamin, a fiber farmer in the UK, recently stated in an interview, “It’s not that things are more expensive now, we’ve just become used to things being super cheap. But they’re not super cheap, because someone’s being ripped off along the way. And if you don’t rip anyone off along the way in your process, it’s going to be more expensive.”[vii] Full stop.

Yet we turn a blind eye to those paying the true price for our perceived ‘freedom’. Going back to Berry’s essay, “in the phrase ‘free market,’ the word ‘free’ has come to mean unlimited economic power for some, with the necessary consequence of economic powerlessness for others.”[viii] Freedom for who, then? Exemption from limits for what segment of our population? We can wave our flags and pledge our allegiance until the cows come home, but ‘freedom’ will only ever be an anemic assemblage of seven letters until we all fall under its purview.

The truest liberty grants us permission to be exactly what we are—humans in place and time doing the very best we can. Seeing the faces of our neighbors instead of price tags. Sustaining an economy that is fair for all and kind to the land that carries us. Conducting the most basic of our lives’ tasks with dignity and respect. That is a lineage worth passing on.